Rotary (Don Valley) Cheshire Homes (RCH) founding in the early 1980’s is due to the enormous efforts of two exceptional individuals: Joyce Thompson and Vim Kochhar.

As a case manager with Deafblind Services at the CNIB in Toronto, Thompson had documented the unmet needs of her clients living in the community; people who, because of their disability, lived in severe isolation due to little or no access to intervenor services and unsafe and inappropriate housing.

Thompson and her clients dared to dream the unimaginable: a better life where they were safe, where people could communicate with them, and, most importantly, where they would have access to an intervenor whenever they wanted.

At a routine board meeting of the Cheshire Homes Foundation in October 1983, Kochhar and his fellow directors discussed how to build accessible housing for persons with physical disabilities. As a member of the Toronto-Don Valley Rotary Club, Kochhar enlisted the help of his fellow Rotarians in organizing the first Great Valentine Gala in February 1984. Over 1,200 people attended, raising over $239,000.

Due to the tremendous success of the Gala and the need to distribute the funds raised, Kochhar founded the Canadian Foundation for Physically Disabled Persons. CFPDP continues to organize hugely successful events each year, providing support to persons with disabilities, and on-going support to CHKC.

A portion of the funds raised at the first Gala were allocated to the Rotary Club to fund the development of housing for physically disabled persons. Thompson heard from a colleague that the Rotary Club was looking for a group to benefit from this project. Thompson and three of her colleagues worked through the night putting together their presentation. 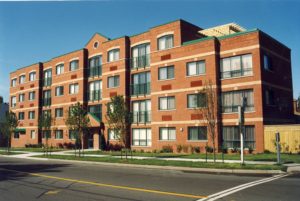 It was decided the best person to present their proposal would be a person who is deafblind. Kerry Wadman, President of the Canadian National Society of the Deaf-Blind, and his intervenor.

The Rotary Club unanimously agreed after the presentation that they would support the development of appropriate housing for persons who are deafblind. This development became Rotary (Don Valley) Cheshire Homes (RCH) – its name paying tribute to the financial contribution of the Rotary Club and the independent living philosophy of Cheshire Homes.

Over the next seven years, RCH slowly took shape from that first presentation to its official opening on May 1, 1992.

In 1992, Rotary (Don Valley) Cheshire Homes Inc. (RCH), with transfer payment agency status from the Ministry of Community and Social Services, began offering unprecedented levels of intervenor services to the 16 residents of 422 Willowdale Avenue who have the dual disability of deafblindness.

Later, in 2006 due to the Ministry of Community and Social Services (MCSS) transformation process in the intervenor services sector, RCH received enhancement funding to provide community services coordination, outreach and emergency intervenor services.

In 1997 the board of RCH commissioned a Survey of Need to determine the service needs of the deafblind community.  The results of that study indicated that one of the gaps in the community was training for consumers who are deafblind to develop and strengthen their skills of daily living that increase independence.

Canadian Helen Keller Centre opened its doors in July 2001 to provide deafblind Canadians with training opportunities and services, and to raise public awareness about the needs of people who are deafblind.

In 1998 a property was purchased at 210 Empress Avenue in Toronto, Ontario to begin the development of the Centre. After securing a five year grant from the Ontario Trillium Foundation, CHKC officially opened the Canadian Helen Keller Centre on May 1, 2001.

In 2007, CHKC secured funding from the Ontario Ministry of Community and Social Services to provide individual training, workshops, and seniors support services to individuals who are deafblind in the Toronto area.

In April 2015, CHKC received new permanent funding to provide multi-lingual training programs to all Ontarians who are deafblind. This additional investment by the Government of Ontario’s Ministry of Community and Social Services enabled all individuals who are deafblind across the province with opportunities to learn new skills to increase independence and enable greater participation in their home community.CHKC still relies on fundraised dollars to cover various programming, administrative and facility related costs.

In September 2015 RCH and CHKC announced their intention to amalgamate as a single agency to serve the affordable housing, intervenor services and training needs of deafblind persons across Ontario.

In 2014, a Corporate Structure Committee (CSC) was appointed by both Boards of Directors to pose the question of amalgamation to consumers and other important internal and external stakeholders, seek guidance and support from key partner the Ministry of Community and Social Services (“MCSS”), undergo a legal consultation process, and consider governance, financial, staffing and program and service resources and impacts.

After welcoming and considering all input, perspectives and advice, the Committee recommended that formally marrying the two agencies under a federal charter would be the best path forward.  Beginning April 1, 2016, the two agencies amalgamated under the corporate name of Canadian Helen Keller Centre.

A number of divisional names continued to be used under the CHKC umbrella to pay tribute to the history of the agencies and to provide consistency for consumers.  These include:

By streamlining current governance processes, the newly amalgamated agency would move forward with a stronger, more focused Board of Directors to lead the strategic growth of services for persons who are deafblind.  Amalgamation also reduces duplication of work and some administrative expenses.

In 2000, Joyce Thompson approached CHKC and CHKC’s local MPP David Young to initiate the official naming of June as Deafblind Awareness Month in the Province of Ontario, and single-handedly spearheaded the founding of JuneFest in 2003 to celebrate the month.

Bill 125 (2000) – An Act to proclaim the month of June as Deafblind Awareness Month in Ontario received royal assent in December 2000.

June is the birth month of Helen Keller, a deafblind person known around the world for her perseverance and achievements, and an inspiration to the deafblind community.

Therefore, Her Majesty, by and with the advice and consent of the Legislative Assembly of the Province of Ontario, enacts as follows: 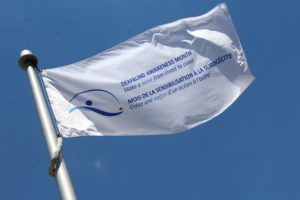 The national proclamation of Deafblind Awareness Month throughout Canada followed 15 years later in May 2015.

In 2013 Honourable Vim Kochhar garnered the support of two colleagues in the Upper Chamber, Senators Yonah Martin and Jim Munson.  They co-sponsored the following motion, which was endorsed by Senator Joan Fraser:

“That the Senate take notice of the month of June as the birth month of Helen Keller, who is renowned around the world for her perseverance and achievements and who, as a person who was deafblind, is an inspiration to us all and, in particular, to members of the deafblind community; and

That the Senate recognize the month of June as ‘Deafblind Awareness Month’, to promote public awareness of deafblind issues and to recognize the contributions of Canadians who are deafblind”.

The motion was adopted unanimously by the Senate during its last sitting in May 2015, just in time for celebrations marking the occasion the following month.

As part of the celebrations for this historic event, RCH and CHKC invited representatives from the deafblind community to come together in the nation’s capital on June 18, 2015 to thank the Senators who worked so hard on the initiative.  Over four dozen consumers, intervenors, service providers and Board members attended the event alongside many other Senators and Members of Parliament.